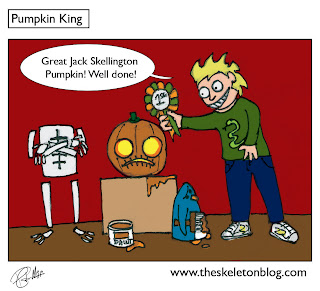 Well happy Halloweener everyone! Tonight's the night when all the dead rise and feast on the living and we celebrate by scaring the shit out of each other, only eat fruit dipped in caramel, get drunk and dress in costumes for 15 minutes before taking them off and discarding them due to discomfort. Here's a little bonus comic just for the occasion. When i was going up we carved turnips which are hard as rocks and smell and taste awful. You pretty much needed an adult to do it for you because cutting holes in the turnip or scooping it out was near impossible. This is why they only ever had triangles for eyes and a crappy little grimace. Now we carve pumpkins like the americans and can pretty much carve whatever we like, easy as pumpkin pie. Sometimes I wish we still carved turnips as this required much more skill and dedication. It was also more likely end in a lost finger, a blood soaked vegetable and a Halloween trip to the emergency room.
Posted by MediaSlugz at 09:00 No comments: 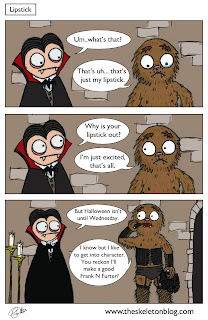 Halloween is nearly here so I hope you all have your costumes ready. On previous years I've avoided going out into town due to how busy it can be on Halloween night and how expensive it generally is to drink in bars and clubs rather than at home. This year's different however as I'm going to dress up as a drunk for Halloween. This means I can easily bring my own booze out as part of my costume! Two litre bottle of cider in hand, a bottle of cheap whiskey in a brown paper bag and a couple pint bottles of Stella hanging precariously out of each coat pocket. Genius! Halloween is probably the only night of the year when a homeless drunk can have a decent night out. Begging can get him a couple of quid (or he could liberate some roses from a garden and sell them to fellow drunken revelers to give to their one night stands) and pay his way into a club under the pre tense that he's in costume. Once inside all he has to do is play minesweeper and drink the dregs and half empty drinks left around the darkened venue. He could boogie on down, integrate himself into a party who have ordered a round of shots and swipe one before anyone notices! Come to think about it, Halloween's like Christmas for the homeless.
Posted by MediaSlugz at 09:36 No comments:

Creatures from the White Lagoon 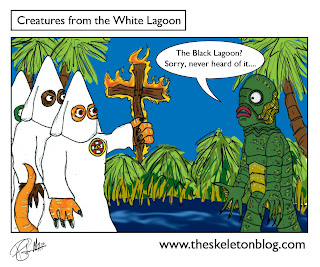 Why do the KKK dress as ghosts? A quick look on Wikipedia tells you that the costumes are to hide their identities and to scare people. They may not be specifically dressed as ghosts but at Halloween their costumes probably get reused as ghost costumes. To try and get people to join their little racist ‘Klub’ the KKK have made it as exciting as possible. They have positions in the organization such as ‘Exalted Cyclops’ and ‘Grand Wizard’. Is it just me or does all the costumes, secret identities, Cyclops and Wizards sound a bit like some sort of fraternity of Super Villans? Has there ever been an issue of Spider-man where he takes down group of Klansmen as they try to lynch Storm, Luke Cage, The Black Panther and The Falcon (pretty much the only black superheroes I can think of)?

Also worth noting is that the Klan have a secret code for communicating. It’s completely genius, fool proof and not even slightly juvenile or retarded. They pretty much just replace the first few letters of every word with ‘KL’. Examples of these ‘code words’ are Klonversation (conversation), Klavern (a cavern or tavern), Klavaliers (cavaliers) and my personal favorite The Kloran (the KKK handbook). The original Kloran was written in 1915 and is made up of the words Koran and the traditional ‘KL’ slapped on the front. There may not have been many Muslims in America in 1915 but I’m guessing now they’re wishing they’d went the name KLible instead……..

Posted by MediaSlugz at 11:12 No comments: 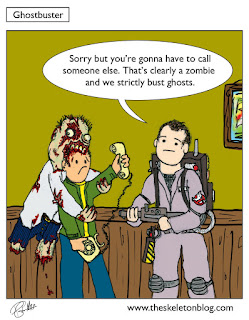 Another horror themed comic for the run up to Halloween.

I remember a few years back I used to go to a club called the 'Limelight' (now imaginatively renamed 'Limelight 2'). Every week they played the same songs to the point where you could pretty much take bets on what song would come up next. They used to love playing the odd theme tune like Ghostbusters and the A-Team. Everyone would leap out of their seats when they started playing one. Everyone knows the ghostbusters theme, everyone loves it! Everyone would rush and pack the dance floor, eager to show the world though dance how much they love 80's TV shows and movies!

Once they got there however the reality would sink in. As they tried to 'bust a groove' to the ghostbusters theme they would realise that you can't dance to most theme tunes. You can't pull off some nifty dance moves to ghostbusters. All you can really do is march in time to the music, dully, for 3 minutes, pausing briefly to tell your friends that you 'ain't afraid of no ghosts'. Slowly but surely after 60 seconds of marching 90% of the people return to their seats and watch the awkward few march in time for the remainder of the song.

And if you think its hard to dance to ghostbusters, try the A-team. You can sing the tune in your head, it sounds exciting doesn't it? Try it on the dance floor, its particularly difficult when the voice over man starts telling you the back story of how they were 'accused of a crime they didn't commit' or whatever. Try dancing to what is essentially an audio book with backing music. So yeah, this comic has a zombie in it. Happy Halloween.

Editors note: I've since been back to the newly refurbished Limelight(2) and it appears theme songs are no longer on the menu. It still smells of armpits and ass though.
Posted by MediaSlugz at 11:31 No comments: 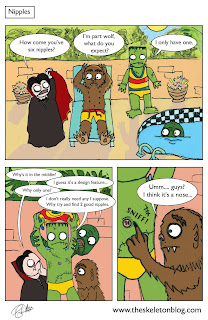 Halloween is coming soon so I'm gonna try and post some Halloween themed comics. What would happen if all the classic horror monsters went on holiday together? I reckon they'd just hang by the pool all day. Dracula would be drinking sangria, staying in the shade. The wolf man would be topping up his tan. The creature from the black lagoon would be having a swim obviously. I wrote this comic after I noticed that my male dog has like a dozen nipples or something. 2 on a male human seems a bit weird but to give so many to a male dog just seems madness!
Posted by MediaSlugz at 20:06 No comments: 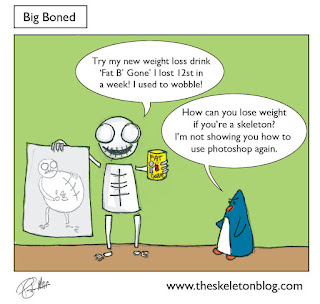 Not a lot to say about this comic. Apparently that penguin and Skeleton boy have some Photoshop skillz though. I got a new puppy last week. He’s a Pug and has a face like a dog that’s been hit by a shovel and eyes like a crack addict. Naturally the first thing I did was Photoshop (via an iphone app) it to look like Thor. Naturally. 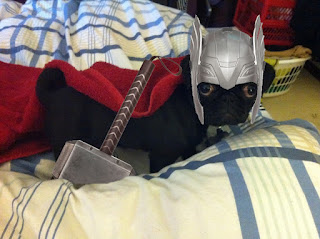