Who is 'The Batman'? 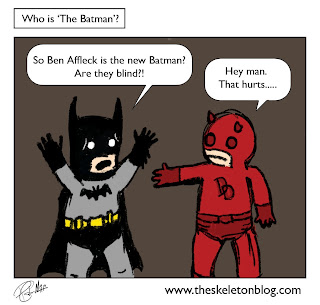 Ben Affleck eh? I didn't see that coming. To be fair I actually thought the Daredevil movie wasn't awful and Affleck has been making some decent movies lately. Maybe he can do it. There are some things about Christian Bales's performance which aren't the best (like his hilariously gravely voice and his pointy chin rather than the classic square jaw) but he's a terrific Batman. Maybe they've seen something we haven't. He wouldn't have been my first choice but I'll wait and see. Heath Ledger seemed an odd choice for the Joker as I recall. We'll just have to wait and see what the Batfleck has to offer.
Posted by MediaSlugz at 09:25 1 comment: 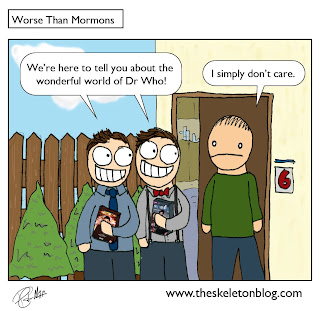 I like to think that when these fellas knocked the door, they were asked 'who's there' and they replied 'doctor'. Thus beginning the greatest knock knock joke ever. Dr Who's fine and all, I like the wee police box and the magic pen with the LED on it, But the fans kinda can be crazy though. Its maybe not some much that the fans love it so much, I think its that a) they are usually younger than most geeks/fanboys and b) they have the full might of the BBC to force it night and day on everyone else. They even have a Dr Who proms night, featuring music from the show! On the upside Dr Who is one of the easier characters to dress up as for halloween and they have found the best way to make the recasting of the main character not only make sense but be integral to the show itself. James Bond has never explained any of that and don't say it's a disguise. I've seen what Connery this constitutes as a discuise for 'blending in' to japanese culture.

PS. Suffice to say, my favourite doctor was Rowan Atkinson.
Posted by MediaSlugz at 10:31 No comments: 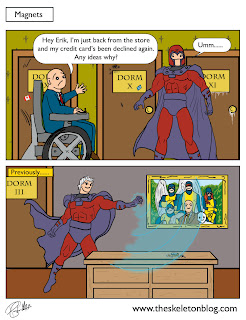 This comic obviously works best if you read Xavier's part in Patrick Stewart's voice. Although I'm guessing you did that automatically. Magneto is a douche who ran a group called 'The Brotherhood of Evil Mutants'. This is the worst possible name for a terrorist organisation. When you put the word evil in the title of your group you're probs gonna attract a certain shady individual.
Posted by MediaSlugz at 11:45 No comments: 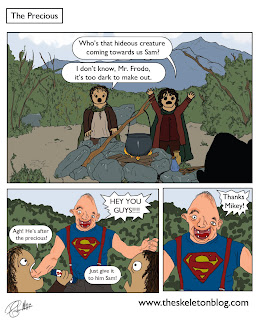 The Goonies and Lord of the Rings are basically the same story. The only difference is that LOTR takes 3 movies to get there and Goonies takes one. Oh and also Goonies has a pirate ship and a theme song by Cyndi Lauper. As far as I can tell these are the only 2 differences I can see.

Below is a picture of Sean Astin in Goonies and LOTR. Check out the link to see what the Goonies are up to now.  Guess which one of them has grown up to be a martial artist. If you said Data, you'd be racist!
http://www.bradyharan.com/goondust/goondust_main.htm 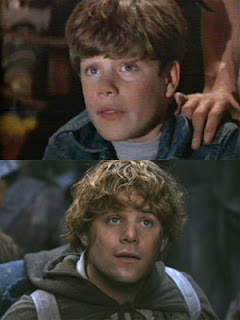 Posted by MediaSlugz at 10:17 No comments: