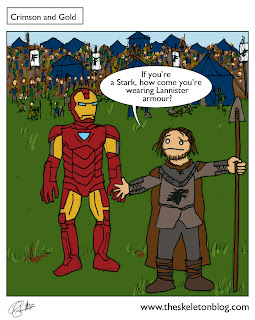 Most of these came from Uproxx.com so check that out for more of the same.
Also here's the Joffery/ Bieber tumbler that's been doing the rounds, just for the lulz.
http://joffreybieber.tumblr.com
Posted by MediaSlugz at 10:47 No comments:

Enemy at the Gates 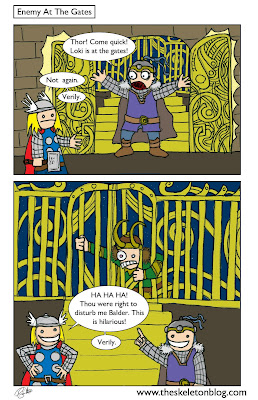 Loki's helmet always looked a little cumbersome to me. Awesome but impractical. In the comics Thor spoke with like a Shakespearean thing going on, 'Thou hast been slain!' etc. This is a bit weird considering he's a Norse God. Also in the comics I guess they didn't know what to do with him so they gave him an alter ego 'Donald Blake' which is bizarre. Donald is a mild mannered doctor who hits a stick off things to become the 'Thunder God Thor'! When the film came out all the white supremacists were up in arms because the Norse God 'Heimdall' was played by one of those dark skinned fellows 'Idris Elba'. Seems that the KKK are comic fans, I suppose that explains their love of costumes and secret identities. Anyway they boycotted the movie or something because they changed a fictional character's skin colour.
Posted by MediaSlugz at 10:27 No comments: 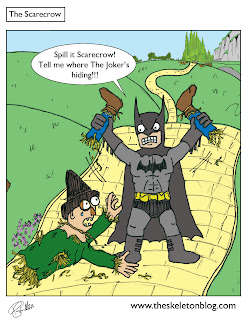 Welcome to the 150th comic. Please enjoy Batman and The Scarecrow in their epic battleings.
I saw 'Oz: The great and powerful' the other week and it was pretty serviceable, mostly because James Franco is hilarious in anything he's in and because both Mila Kunis and Rachel Weisz are in it. A couple of things have to be said about it though. Quite a lot of cleavage for a kids film and green cleavage at that. Mila Kunis has a big green moon face which (not witch, ha!) is fairly distracting along with said green cleavage. Also Mila kunis has a screechy Meg Griffin voice that doesn't work well when she shouts and she shouts alot in this. This has turned into a bit of a Kunis bashing hasn't it? She's good in other stuff just not as the wicked witch. I'd like to add that the flying 'bellboy' monkey was well done, the other flying monkeys were terrifying and that like most movies, this one was about a half an hour too long.
Posted by MediaSlugz at 09:00 No comments: 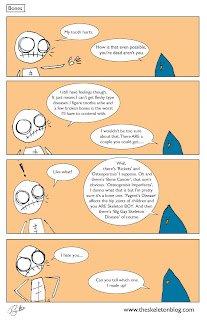 Not my most specific of drawings this one. The penguin thing is pretty much a blue triangle but what's wrong with blue triangles eh? As I type this there is a kid on the train about 10 years old who's rhyming off facts and figures about Carrickfergus and it's castle. 'There's Carrick Castle! It was built round a well in Norman times!' For some reason this is annoying me. He's being precocious and he needs a slap. No one asked for his facts and figures, he's just spouting them so he can feel all grown up and smart. I'm all grown up and smart and it didn't do me any good so someone give that kid a beer and a couple of Jagerbombs and maybe he'll puke up all those useless smarts and he can feel the hangover tomorrow like a real man.
Posted by MediaSlugz at 09:00 No comments:

The Golem of Liberty 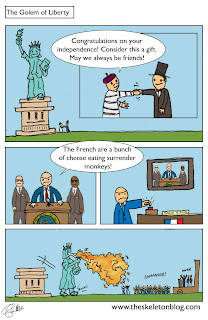 Happy Easter everyone! Enjoy your chocolate representations of the stone that kept Jesus's body trapped in his tomb. I find it weird that France gave America a big statue of a lady with a book and a night light, but I suppose what do you get the country that has everything....
Posted by MediaSlugz at 20:53 No comments: