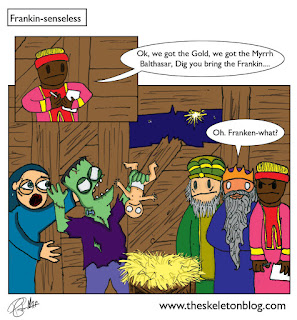 Merry Christmas everyone! I was reading up on the 3 wise men and the nativity and all that business and found out a couple of things. Apparently there probably wasn't 3 wise men, they gave 3 gifts but apart from that the bible doesn't say jack else. Some eastern religions claim up to 12 wise men. It doesn't even say they were kings. so that spoils that christmas carol then........ It also says when they came into the house (not stable) they saw the young child (not baby) and fell down and worshipped him. They where a bit late to the party then. They didn't arrive at the stable with the shepherds, they must have come to the house warming party and met the young toddler jesus not the cute baby jesus. Does this mean that Christmas is all full of crap and there's no point celebrating it? Well if your Crimbo is centred around the 3 wise men then yes. If your christmas is about presents and turkey and nice big glug of booze with the family then no. I know which one I prefer to celebrate.
Posted by MediaSlugz at 19:24 1 comment: 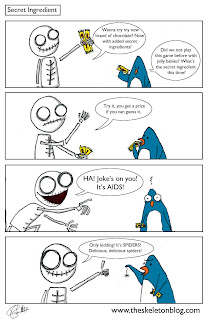 Another Monday, another comic. The other day I was on the train and overheard some 15 year olds waxing philosophical on all kinds of topics. They talked about how the government 'didn't want to legalise pot because they couldn't tax it'. They said 'you can tax booze and fegs' as you 'can't make them yourself at home'. As they continued with their intellectual debate, they decided to try and create the perfect woman. 'Pixie lat's legs' (I take it they mean Pixie Lott), 'Rihanna's bady' (body) and 'Be-yancy's arse' (Beyonce?). Quite the woman I'm sure you'll agree, although what worries me is that they have no plans for giving her any arms or head. Creepy. I've added a mockup I did of what it might look like....i think they might be on to something...... 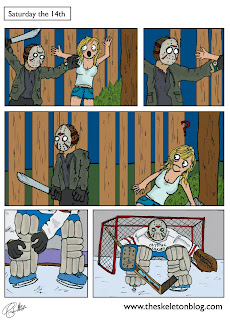 What does Jason Voorhees do on his days off? You know, when it's not Friday the 13th? He's a big guy who just won't stop. That's determination for. That's commitment. Sports is the perfect outlet for all that physicality he's got pent up, plus he already has that hockey mask. The problem though is that if the crowd start chanting, 'kill kill kill!', then he might actually whip out the machete and start chopping' heads.
Posted by MediaSlugz at 09:34 1 comment: 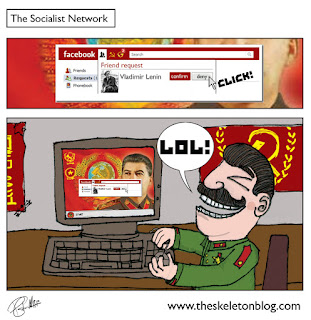 On the last day of November PastieBap.com/Badhaven.com had a Movember pub quiz in the Hudson Bar. This was mostly for testicular cancer (not for, against really) but also to undo some of the damage that has been done to the humble nose trophy by dictators and the like over the years.
Charlie Chaplin had a toothbrush moustache before Hitler did but it's known as a Hitler Moustache and not a Chaplin one. Stalin had a big ol' handlebar moustache too, making the world a dangerous place for those sans facial hair. So the Movember shenanigans, where men grow moustaches and women draw them on for the month of November, is a charity event to prevent ball cancer and promote the decoration of one's upper lip with a bit of facial tinsel pre Christmas. Sounds like a worthwhile endeavour to me.

While researching this comic I came across a question on yahoo answers that gave me pause for thought....

'Why did Lenin hate Stalin?'

And the most helpful answer as voted by 100% the public?

'Because Stalin made an abusive phone call to Lenin's wife.'
Posted by MediaSlugz at 09:16 No comments: