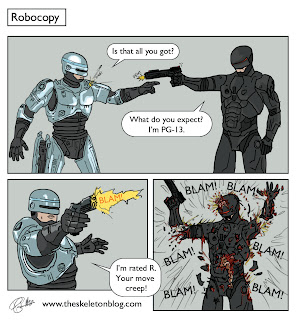 So they're making a Robocop reboot (heh heh reboot, get it?) down in ol' Hollywood and in their infinite wisdom they've decided to make it a PG-13. I find that a bit odd. When you think back to the original among the many memorable scenes is Murphy's (spoiler alert) death scene where he is (spoiler alert) blown to pieces in the most terrifying and bloody fashion (it's also (spoiler alert) hilarious). Seems that a lot of the original charm of Robocop was the over the top ultra-violence of a robotic law man blowing criminals to kingdom come. This new one which I will admit has a lot of promising elements to it, Sam Jackson, Michael Keaton for example (and the suit doesn't look too bad either) has wimped out a bit. I reckon they want to sell a lot of Robocop toys and if its able to be shown to kids then they can sell more toys. I worry that they're missing the point a bit though. The R rated attitude of the original is one of its defining features, the bad guys are real sadistic bastards who get their comeuppance in a delightfully theatrical way. Making a PG-13 Robocop is  like a family friendly 'Human Centipede' cartoon. It kinda misses the point.
Posted by MediaSlugz at 10:37 6 comments: 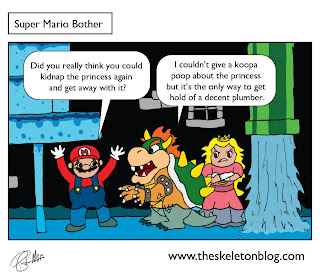 Mario first appeared as Jump man in the first Donkey Kong game. Here he plays a carpenter with a pet ape. Apparently mario 'mistreats the ape' (its all on wikipedia folks, it wouldn't lie to us would it?) so Donkey Kong kidnaps his girlfriend Pauline and throws barrels at him (seems logical). What the hell is going on with that plot? You play a 'carpenter' who owns an 'ape'? If i had an ape i'd be shit scared of that thing. I wouldn't be casually mistreating it like Mario. Animal cruelty = rampaging apes is what this game teaches us if anything. I would have thought the hero in the game would be the mistreated ape rather than jump man. Breaking free of the shackles of slavery and oppression and finding someone to love. Seems Mario's just getting what he deserves.
This smacks of a game that was made first and then they had to come up with the backstory after. At least it has a story we can understand. You should try playing Halo. I'm not even sure anyone knows whats going on there. Just shoot the aliens that's all you need to know. They stole a pack of cigarettes from the president of space or something. 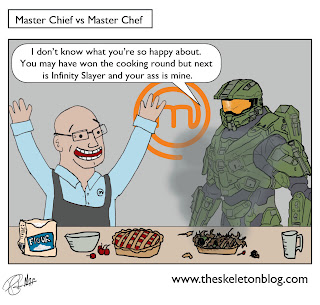 I'd really like to see Master Chef's Greg Wallace go at it with Halo's Master Chief. I recon Greg would have a good chance. No wait a minute of course he wouldn't. Master Chief would crush him like a bug and blast a hole in his face. But who could be mad at Greg? He's so jolly. Master Chief that's who. Lets hope they never meet. I'll give him Anthony Warroll Thompson's number instead. 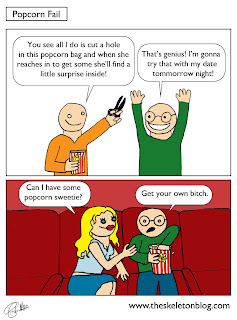 In reality this wouldn't really work the best would it? You'd be sitting there for ages with your lad in a box of popcorn hoping she'd touch it, then when the movie is over you'd have to somehow get everything back where it should be.
Posted by MediaSlugz at 13:46 1 comment: