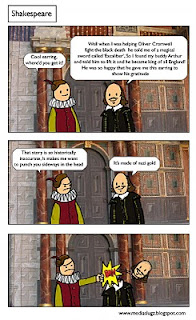 Shakespeare, Shakespeare, Shakespeare. He's that bloke that wrote the second series of blackadder, the one with Queenie in it. Revered thought all of England as 'the bald man with the plan'. The picture in the background is an actual picture of Shakespeare's Globe Theatre in London so take that historical inaccuracy man! When reading about William (that's right, I'm on first name terms with the man) on wikipedia, 2 things struck me as odd.
1)Shakespeare (I made a faux pas and since England was at war with the french he put me back to last name terms) had a son called Hamnet. This proves he cant even spell the names of his own characters. My first son will be called Skeneton Boy in this tradition.
2) The only thing Shakespeare left his wife Anne Hathaway in his Will was his "Second best bed" (She's never referred to as Anne Shakespeare.....wonder why.)
Now, I only have ONE bed which I share with my girlfriend and I would assume she would get it when I die as she would still need somewhere to sleep. Why did he have a second bed? Did he have more than 2? Was there a third and fourth? Did he have a thing for beds? Is there a lost play somewhere about his love of beds? A sonnet perhaps? We will never know the madness that reigned supreme in Shakespeare's head but we do know that when it comes to his last will and testament, he was a bit of a douche.
PS: I find it amazing that I got through all that without some sort of lame 'two beds or not two beds' pun.
Sorry.
Posted by MediaSlugz at 10:06 1 comment:

Hey everyone! It's Mung the zombie chum! And what a zombie chum he is too. My Brother, Girlfriend and I were in a zombie film once. George Clarke's home grown zombie movie 'The Knackery', which was filmed on a shoestring budget of £0.00. I had the enviable task of chewing a co star's ear off. Nom! You can see a trailer here (I'm not in the trailer more's the pity) and rent it from love film here.

Before I go I'll leave you with this amazing 1 star review from 'Peter Atkinson from North East'. North East of where we will never know... seems he may have been expecting some sort of 28 days later type affair what with a cast, choreography, a location, music and a budget.

"This has been given 1 star because I cannot give it zero. This is absolute garbage. The acting is wooden and the soundtrack appears to have been recorded on the kind of microphone that picks up every sound, in one scene you can even hear the ticking from the clock on the wall. As for the special effects, forget it, the blood looks like coloured water. Fight scenes, oh please, I have seen better in a playground. The reviewers that have given this 5 stars must be very easily pleased. I seriously urge you not to waste you time and money with this."

I'm proud to say I played a small part in ruining that guy's night....
Posted by MediaSlugz at 09:00 1 comment: 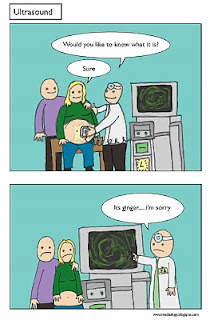 Ultrasounds are weird, they sound like the noises that dolphins make to communicate with whales. Dolphins are actually extremely evil creatures. The 1973 movie 'Day of the Dolphin' can attest to this as it's tag line is "Unwittingly,he trained a dolphin to kill the president of the United States".
They should make a sequel which involves Barrack Obama defending the white house with a crack team of Killer whales....on crack.
Posted by MediaSlugz at 09:00 2 comments:

About a month ago I found a dead bumble bee and decided I would start collecting insects and pin them down like in a museum. All the world would marvel at my vast collection of insect. I looked online for pins and boards and the like and got excited about my new venture into the natural sciences. I would be the new Charlie Darwin making observations on my specimen and become more enlightened and well rounded as a person. I would be invited to gala dinners with high society and talk about science and theology and whiskey.
After a week of this fanciful speculation on my future as a member of the royal society I promptly lost interest. That was a life I would never lead..... the bumble bee is still in a tupperware in my kitchen.
Posted by MediaSlugz at 09:07 No comments: