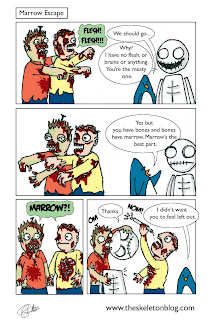 Halloween is coming and the goose is getting fat which is why I've posted a horror themed comic. Are zombies the living dead risen from their graves or are they sufferers of plague or virus? Who knows? Who cares? I think I prefer the grave risen zombies, the more occult style ones. The other ones could conceivably claim DLA though. They are clearly too sick to work. They have low concentration and not much hand eye coordination. If anything we should feel sorry for that second category of zombies rather than judge and fear them. 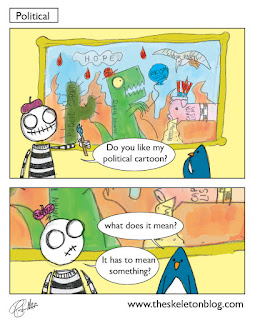 The problem with politicians is that anyone who wants to be one shouldn’t be allowed to be one. It doesn’t make sense. It’s such a dull tedious thankless task that only complete idiots with massive egos want to do it because of the perceived power or fame. When really, they all just end up being hated and caught out in a hotel bedroom with a horse mask on and 14 Vietnamese prostitutes by the Sun. The only interesting or memorable politicians are wartime ones like Hitler and Churchill and if you’re living under a wartime politician then they haven’t been doing their job very well have they?

Posted by MediaSlugz at 11:13 No comments: 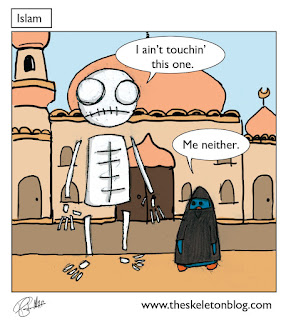 Now I may have had my say about various beliefs in the past, poking fun Christianity for example or other belief systems with no basis on fact. Islam on the other hand is different. Unlike ALL other religions, it is very open discussion and is very much open to the idea that its holy book (which is the verbatim word of the one true God, praise Allah!) doesn’t have all the answers. Muslims are very much known for their willingness to hold up their hands and say ‘I don’t have all the answers, maybe we should see all the supporting evidence first’. Of all the religions, Islam is slow to anger and rational of thought. It is the one religion of which we have nothing to fear. I’d love to draw a nice big happy smiley picture of Muhammad, to represent Islam’s good nature but I think you get the idea.

Posted by MediaSlugz at 10:40 No comments: 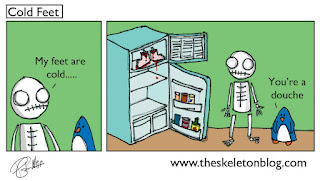 Today's comic features some dismembered feet. Currently my brain can't come up with anything more than that so that's going to have to do you. No stories about Dragons or Unicorns, no explaination as to why I've spelt Dragons and Unicorns with capital letters either. You're just going to have to accept this rather poor comic as this week's offering. Satisfied? Me neither.
Posted by MediaSlugz at 13:47 No comments: