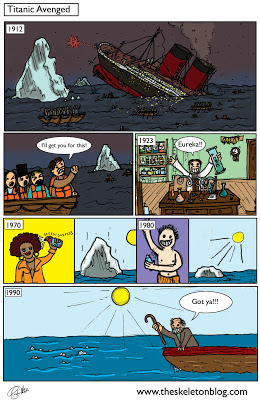 Last year was the 100th anniversary of the sinking of the RMS Titanic. You would think we would celebrate the year that it was built or something rather than the year it sank but hey they didn't make a movie about that so we'll go with the anniversary of the deaths. That would have been quite a different movie though wouldn't it? Leonardo Dicaprio would be hammering rivets into metal for 2 hours 50 feet in the air with no safety harness and what's her face would be eating sugar plums in the Harland and Wolff offices.

Recently they opened a Museum thing about the titanic in Belfast. Check out Pastiebap's review here.

Email ThisBlogThis!Share to TwitterShare to FacebookShare to Pinterest
Labels: History