Skeleton Boy at the Olympics: Archery 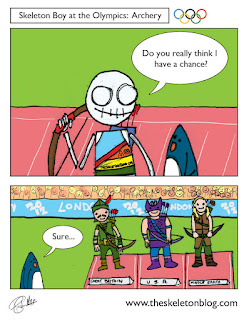 Well that's the end of the Olympics. Everyone can go back to talking about football.
I’ll leave you with and excerpt from the Wikipedia page for the 3rd Olympic games held in 1904 in St Louis, USA. I think you’ll agree that if anything the London 2012 Olympics where better than this……… although it depends on your definition of better I suppose. London’s weren’t quite so funny.

‘The marathon was the most bizarre event of the Games. It was run in brutally hot weather, over dusty roads, with horses and automobiles clearing the way and creating dust clouds. The first to arrive at the finish line was Frederick Lorz, who actually rode the rest of the way in a car to retrieve his clothes, after dropping out after nine miles. The car broke down at the 19th mile, so he re-entered the race and jogged back to the finish line. When the officials thought he had won the race, Lorz played along with his practical joke until he was found out shortly after the medal ceremony and was banned for a year by the AAU for this stunt, later winning the 1905 Boston Marathon.
The marathon included the first two black Africans to compete in the Olympics: two Tswana tribesmen named Len Tau (real name: Len Taunyane) and Yamasani (real name: Jan Mashiani). They were not in St. Louis to compete in the Olympics, however; they were actually part of the sideshow. They had been brought over by the exposition as part of the Boer War exhibit (both were really students from Orange Free State in South Africa, but this fact was not made known to the public). Len Tau finished ninth and Yamasani came in twelfth. This was a disappointment, as many observers were sure Len Tau could have done better if he had not been chased nearly a mile off course by aggressive dogs.’