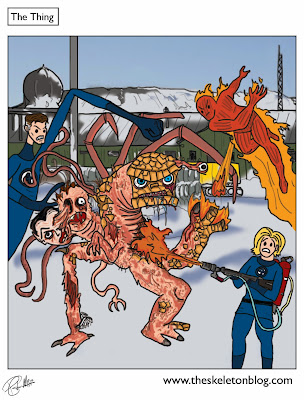 Reed Richards elastic, Johnny is the Human Torch. Sue can disappear from sight and Thing? He just likes to fight. They are the four. Fantastic Four. They're making a new Fantastic Four movie (of course they are) and they're gonna maybe have some black dude as the human torch (of course they are). The internet has a lot to say about this. I'm not sure that I do. Maybe you should go on the internet and see what people are saying? Maybe not. Maybe you're already on the internet reading this. Maybe you should form your own opinion? All I know is that the movie wont be better than John Carpenter's The Thing. That movie is awesome. It has a head with spider legs and Kurt Russell and flamethrowers and snow and a black guy! What more could you want?