The Creature from the Gay Lagoon 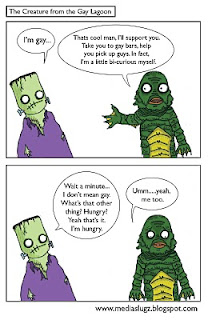 Having never seen The Creature from the Black Lagoon I don’t know too much about it. What I do know is that ‘The Creature’ looks ridiculously awesome especially for a man in a rubber suit. When it was first released it was shown in glorious two tone 3D pretty nifty eh? Word on the grapevine is that there’s a remake in the works (also 3D).
They should take the 3D a step further and do 4D, they could have cinema attendants throwing buckets of rancid swamp water over the audience and have the Gill Man burst from behind the screen and drag an unsuspecting female into the deep dark waters. The only thing that bothers me about ‘the creature’ is its’ fish lips. There’s nothing particularly scary about fish lips. Jaws never had fish lips and he had a 3D film too. ‘The creature’ seems more gross than scary. I wouldn’t want him to touch me because he’d make me all wet and smell all fishy. This is more of an inconvenience rather than something terrifying. More sort of something that would ruin your day as opposed to a vampire bite that would turn you into the living dead.
Posted by MediaSlugz at 12:51