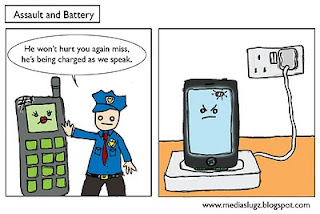 Lucky for him he has a get out of jail free app. Not so luck for her.
I decided to update a few of my apps yesterday and because the interwebs cut off, my phone got stuck in a never ending cycle of trying to download updates. This meant that I couldn’t use any of the apps or stop them trying to update without the internet. So as went into the cinema my phone had 80% charge and as I left it had none. Well done apple, that’s a nice little feature ya got there. Its like some sorta app roulette. Either it works and everything’s awesome or it doesn’t and your phone is dead and you have to use your last 60p to phone for a lift home from the payphone at the train station.
“Hey buddy, how come you’re using a payphone? Don’t you have a mobile like everybody else?” someone would say.
“Oh yes of course, I have one of those fancy Iphones you read about on the television.” I’d reply
“Why don’t you use it then?”
“Um….because the battery’s dead.”
“Didn’t you charge it last night before you went to bed?”
“Of course, but it had to download the latest updates for angry birds and gowalla, I can’t just not download updates because I might have to make important calls later in the day!”
“Well, I ‘spose so, when you put it like that it makes sense.”
“Now I’ll just wait for my lift and listen to my Ipod”
“Doesn’t your Iphone have an Ipod in it?”
“Oh yeah… well I guess I’ll just buy a newspaper to read. I’m sure I had 60p on me somewhere.”
Posted by MediaSlugz at 09:38