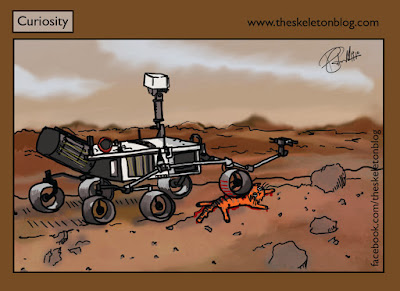 Do I need to explain the joke here? That's the Mars rover killing a cat like a dog would kill a cat. The cat was curious about Mars so it went up there but ran a cropper because there was a dog there called rover that is actually a space probe thingy. So curiosity killed the cat cos he shouldn't have went up there. Actually now that I think of it the joke here is that the rover is called Curiosity. Curiosity killed the cat. Thats better isn't it? It's nothing to do with rover being a dogs name. No idea where I got that from. NONE LAURA NONE! For all you science geeks out there, this is very clever and i'd expect it to be on IFL science if they still did science stuff.
Posted by MediaSlugz at 11:30