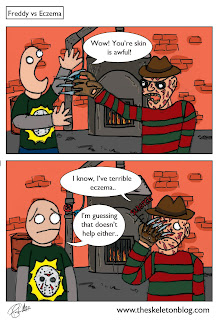 Freddy Kruger was originally intended as pedophile but Wes Craven decided against this to ' avoid being accused of exploiting the spate of highly publicized child molestation cases in California around the time A Nightmare on Elm Street went into production'. This was a wise idea because as much as we need villains in horror movies, we're all really hoping that he catches up with his victims and brutally murders them for our entertainment. This doesn't exactly work the same with a child molester. For some reason it's harder to secretly root for the bad guy when you know he's in with Jimmy Saville* Also as a side note, Robert Englund was on 'Come dine with me' recently and he made cheese on toast. Legend.

*This Saville reference was sponsored by the foundation of worn out jokes.
Posted by MediaSlugz at 10:54