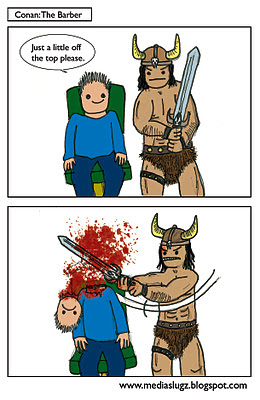 While off with my fractured leg I happened to watch the new Conan film starring that guy off of Game of Thrones.  The film was an enjoyable enough romp but I couldn't help but think that it was lacking something. A little Mufasa /Darth Vader style giant snake cult leader perhaps? Maybe even a Body building Austrian Govenator. No?

That's when I got to thinking, why have they never made a Conan film where he was a barber? I'm pretty there was a book about it. Seems like they're missing a trick.
Posted by MediaSlugz at 18:13